The new Prayer Calendar for 2019 is now available!

Happy New Year fellow pastors and leaders,
As we celebrate the end of 2018 today my heart is full of so many memories of praise to our Lord and Saviour Jesus Christ.  Our BC Association has been blessed with Christ centred churches and pastors who did not compromise when the government imposed a ‘values’ test in order to qualify for the summer jobs program.  Our pastors’ conference in Sumas brought together pastors from 70% of our churches who worshipped, prayed and shared together for 3 awesome days.  The interest in church planting continues to gain momentum and we had 36 delegates to the C2C Church Planting conference this year.  After a couple years of prayer and dialogue our Evergreen Campus of Care board of directors came to the conclusion that the best course for the future of the Care Centre would be to turn it over to Baptist Housing, a well respected senior’s care provider with multiple centres across BC.  Their generosity to our Association for this gift to them will greatly assist our Association in years to come.
The greatest blessing for me as the Executive Minister is the privilege of working with our Executive Committee.  I have never had such a group of dedicated men and women who are so committed to Kingdom growth and ministry.
On a personal note, my wife was finally able to get the renovations done in the kitchen that she had been wanting to get done for several years.  Her cataract surgery was successful and resulted in her not having to wear glasses any more.  PTL
While I have so much to reflect on and be thankful for, there is nothing better than to end my year and begin the next one by giving praise to God.  On one of the many emails I receive, one from Zondervan Bibles came with a list of praise scriptures.  I would like to end my year of thankfulness to God by sharing them with you today.
May God give you good memories of his Grace from 2018 and bright hope for the year to come.
Happy New Year,
Bob

Lots of great fun and laughter at the BC Association lower mainland Christmas party! 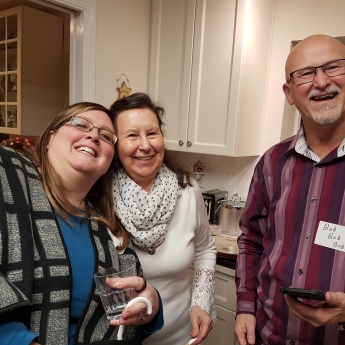 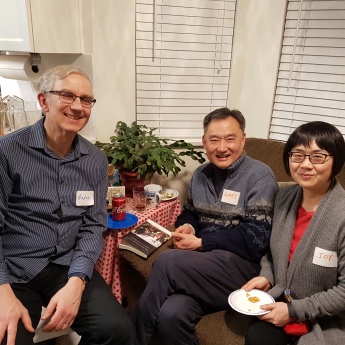 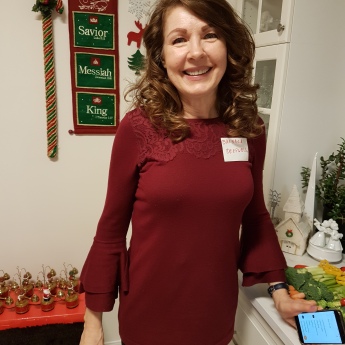 Below are some interesting resources for pastors and churches.

If you would like to sign up for the NAB Leadership Forum to participate in discussions online, please visit: nabconference.org/resources/forms-2/leadership-forum-signup

There are also leadership formation resources on the NAB site at: nabconference.org/north-american-missions/leadership-formation

Plugged In (Focus on the Family): www.pluggedin.ca

We are looking forward to a great time at Pastor’s Conference in 2019.  As voted on at our Association Meetings, the conference will now be in April instead of February.  Please note on your calendars the following dates and we will provide you with more information in the coming months.

Blessings and hope to see you there next year!

You are invited to join us at Grace Baptist Church in Kelowna on November 9th & 10th for the NAB Gateway Workshop on best practices in short-term missions.

From July 26-29, the North American Baptist Conference of Churches (NAB) held their Triennial in Edmonton, Alberta. Our BC Executive Minister, Bob Krahn, and his wife Dawn, loaded up their truck and brought medical supplies, donated by our BC Churches, to be included in a shipment to two hospitals in Cameroon.  This is one of the projects that the NAB is involved with; working with White Cross to send medical supplies internationally.  There were lots of familiar faces at Triennial and the sessions and times of fellowship were a blessing and encouragement to all who attended. 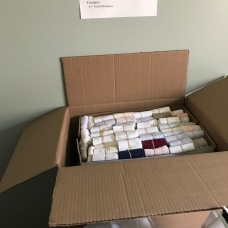 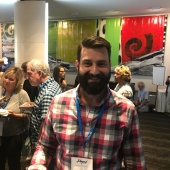 During the spring and summer Bob had the opportunity to visit several different churches and pastors in our BC Association. He celebrated Canada Day at Sunshine Ridge Baptist Church in Surrey, visited with Phil Johnson at Osoyoos Baptist Church where they serve a Saturday meal to over eight hundred migrant workers during the summer, and ran across the border to visit with Mark Fast at New Hope Bible Fellowship in Oroville, Washington.

God is so good and we praise Him for his many blessings including Andre Deepwell’s 40th Wedding Anniversary, Andy Dietrich’s 25 years at Grace Baptist in Kelowna, Chilliwack’s (MidTown Church) new building, and Trinity Kelowna’s building extension. 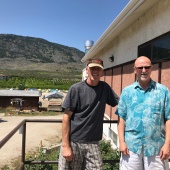 Bob with Phil Johnson in Osoyoos 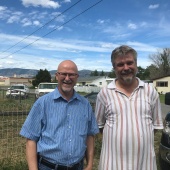 Bob with Mark Fast in Oroville